In the recent past, robotic technology has witnessed tremendous growth with applications in many industries. With more growth expected in the sector, it will become commonplace to encounter a photo robot, robot waitress, or survey robot in your daily adventures. You may have also probably seen robots being used in events and exhibitions to great effect. However, owing to their sophistication and the negative portrayal of robots in some TV shows, many people have grown fearful about them. Just like most new technologies, robotics has become a victim of the fear mentality. Here are some of the myths that have been spread about robots:

Robots are not dangerous and should be viewed as collaborative devices that help humans in doing work more efficiently. They can work safely with people or independently with little or no supervision. Some robots will even assist in doing dangerous tasks that could be hazardous to you. With ISO specifications, you can be sure of Service Robots that have gone through a rigorous risk assessment process.

The fabrication going around is that robots will replace human labour. Automation does not necessarily amount to job cuts. On the contrary, the efficiency of robots increases productivity, which can subsequently allow for the expansion of an industry. Such growth will create new employment and business opportunities in the process.

They are difficult to operate

Modern robots are easy to implement and do not require operators who possess advanced skills in programming. The designs are flexible, mobile, and lightweight. You only need a simple training to have a logical understanding of how they can be controlled.

They are too expensive for small businesses

The misconception does not look at the long-term benefits of owning or hiring a robot. A look into the costs reveals that the payback of a robot is quite short. Enhanced quality of products, improved efficiency, and reduced wastage will ensure that your investment does not take long before you reap the returns.

Understandably, revolutionary technologies such as robots can incite fear among humans and give rise to various myths. Change has always been known to have such an effect, especially when people do not understand its basic concepts. Robots are here to complement and improve human efficiency. Rather than feeling threatened by robots, people should embrace the technology and use them to their advantage. 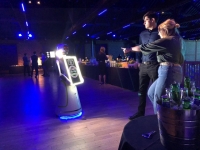 The future of robot photography
Scroll to top