If we think about what’s to come shortly, it’s often difficult to imagine what it will be like to unfold. Are we heading toward an era of ideological workplace culture where technology surrounds us and takes care of our routine tasks?

Are we looking towards the future in which repetitive work is pushed toward automated automation, and support personnel is augmented with a new standard for low-skilled work?

If yes, what would this mean for those working in specific posts? How can we navigate this exciting new frontier regarding hiring, hierarchy, and human resource management?

The nebulous effects of workers’ compensation and liability insurance will be changed by the explosion of modern, high-tech aids. Perhaps?

These questions and many more make up the new collective mentality regarding what work could take on with the help of AI or automation.

While there are many exciting things regarding production, safety, and service quality, some businesses’ workers and owners might be concerned about an entirely new approach to the daily routine.

We here at Service Robots fancy ourselves experts in this field and are taking it upon us not just to spread awareness of the advantages of bionic employees but as well as dispel the biggest misconceptions regarding the mechanized assistance that will be able to do and how it will affect the workplace of today.

You are invited to follow through as we do an in-depth look and dissect the biggest issues today and dispel the biggest myths regarding the automation of work. Let’s begin with the most common misconception.

The most misunderstood aspect of AI robots, automation, robotics, and robotic automation originates from the most fundamental of questions:

What is our role in this?

Before the industrial revolution or the advent of the web, human beings have pondered, “Will we be replaced with robots?”.

Suppose you examine the results of each major shift in the labor market from the cotton gin to the modern computer age. In that case, you’ll see that each of these inventions resulted in many jobs, but they’ve created significantly better work.

It’s the same regarding AI as well as robotics. At the same time, the adoption of these technologies will alter how we work and handle specific aspects of our work.

They are designed to enhance the quality of the work produced and the standard of living for the people around them.

Concerning the issue of whether they will replace specific job roles, our belief is they can replace some tasks, but they will never be able to take on the role of human capital.

The World Economic Forum predicts in its ” Future of Jobs Report 2020″ that AI will create 97 million jobs across the globe by 2025.

Will Robots Be Too Costly for Some?

Another concern with introducing robots into the workforce is that they’ll only be accessible to small businesses.

In a time where mom-and-pop stores have been severely impacted by large businesses and online ordering and retail.

How will the introduction of robotics be able to benefit smaller businesses? Do only the most recognizable brands get the benefit as they do now?

It’s not true at all. As we become more knowledgeable about work, we’re becoming more aware of the business side.

Many robotics manufacturers provide easy payment options and even DIY solutions to create processes that can be automated.

Here at Service Robots, this was certainly one of the biggest concerns we had on our own. We understand how difficult it can be to compete in the current market in a small-business world.

We provide our customers with simple leasing options starting as low as $33 per day. In essence, it provides them with a full-time worker to do the job it’s almost impossible to find humans to perform and pay less than the cost for these routine services.

Robots Will Become Smarter Than Humans and Take Over the World

Despite the scare techniques in the most popular sci-fi flicks, robots do not have any intention to take over the world. However, this doesn’t hinder people from asking.

According to Google, “can robots take over the world” is the second most-searched-for query about AI. In a variety of different ways, AI could be tremendously clever.

Think of the way you came to this post and how it was developed in part because of algorithmic ranking or search engine optimization, or even natural processing of languages (Hey Google, can robots be able to take over the planet?)

But think about the amount of human input that was needed in tandem. Without humans, AI is nearly useless. Without what’s often referred to as ” Human-In-The-Loop,” AI is just an array of complicated code that lacks real judgment or curiosity.

Humans will never adapt to an Environment with Robots

We’ve all heard of the technological skeptical, cynics, and critics – self-proclaimed Luddites. They’re everywhere, in every country, and in every business.

You’ll see the old school group fighting against all robots and stumbling through the streets with their flip phones or browsing any store’s vinyl section.

Many believe that we’ll all adopt this mindset towards the latest technologies in the workplace.

This isn’t the reality. Humans, with each new invention, can be surprisingly quick to change. Consider the number of AI acquaintances and automation cohorts you have in your life every day.

From point-of-sale systems to timesheet processing and self-timed coffee makers to kiosks that allow you to order your coffee, Automated systems are already making your life easier.

There are indeed a lot of robots, both electronic and mechanical, that make the modern world of business viable and are working with you.

Mechanical robotics, similar to AI in the software, will rapidly be the standard, assisting humans to complete the difficult aspects of their jobs to focus on the things that matter most. 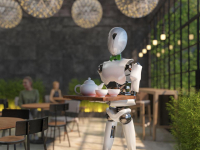 The Robot Hire Business is the next big thing, here’s why
Scroll to top