Although there are many interpretations of what Robots should be, what we do know is Computers are essential but the true potential of edtech revolution is Robotics.  Robots have gradually inched their way forward into our lives and one area they are particularly becoming dominant is education.

Insiders have stressed for a long time that Education needs to innovate, not only by keeping Students engaged but using the tools which are now so readily available which will allow education to be delivered in new ways.

There is a real fear about Robotic Automation especially within the manufacturing environments where there is the general feeling that humanity is being sidelined and replaced. What is actually happening however is far removed from replacing Human jobs but rather implementing Robots to work alongside humans.

There have been continued advances in language recognition software from Companies such as Microsoft and google, allowing almost any language to be practiced in an organic way and Robots acting as teaching assistants works brilliantly in this environment.

Social Robots have the ability to engage with students through facial animation and gestures meaning they can operate very successfully in story telling situations, also delivering reading material whilst Teachers are able to use their resources elsewhere planning and assessing Students progress.

Social Robots can be used to teach a range of subjects but many would ask why Teachers would opt to use Robots instead of classroom Computers and the simple answer is centred around social behaviour’s which we know are beneficial for learning  with users displaying  increased learning gains when physically embodied systems over virtual agents.

The idea of a tutor per student is still an unrealistic goal today but we know this type of learning reaps great results.  We know that Social Robots have the very real potential to bridge this gap especially when it comes to shorter well defined learning goals.

Robot Trends For The future 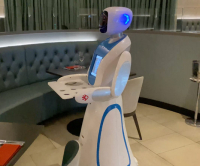 The Rise Of Service Robots
Scroll to top