As Restaurants prepare to reopen, Restaurant owners are looking outside of the box to maximize their revenue potential. Sales in Robotics have increased dramatically over the past 12 months and so have people’s perceptions of them. The issue with social distancing has only increased awareness of how useful Robots can be working alongside Humans.

There is much prediction for the next five years with varying degrees of opinion surrounding the use and popularity of Robots in such settings as Restaurants and public places but all predictions have one thing in common, they predict the use of Robots, most notably service robots will increase dramatically over the next five years.

Annual installations of industrial Robots has more than tripled within ten years from 2010-2019 reaching an estimated 381 thousand units in factories around the world.  This mission to combine traditional production with go digital strategies is said to be the main incentive.

The service robotics market was valued at 23511.1 Million USD in 2020, with an expected reach of 212619 million by 2026. Technology innovations have certainly made service Robots more appealing to the market, researchers at university of California have developed a Robot that uses artificial intelligence A1 to perform intricate human tasks such as folding laundry or making Coffee.

One area that has seen an increased interest is the hospitality industry where Restaurants are employing the use of service Robots with products such as Amy waitress to interact with guests, deliver food and return plates, cutlery etc back to the kitchen.  Other areas where service Robots will increase over the next five years are Airports where they will handle check in and check out services in hotels.

The recent pandemic has only highlighted the benefits of Robotics and how they can be used in each industry and it is estimated they will be employed on a grand scale to deal with tasks such as contactless delivery options, cleaning and disinfecting, delivering food and drinks, medicines and food.

Is The Edtech Revolution On Its Way. 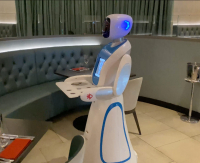 How Service Robots Are On The rise In Hotels.
Scroll to top