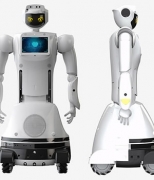 To show just how varied their work can be, let’s take look back at just some of the higher profile roles our most versatile model, the Sanbot, has taken on for many leading companies. If you’re intrigued by the idea of robot hire, but don’t know exactly what they could do for you, these success stories should provide a range of ideas…

Hospitality
Sanbot has been deployed by the Bank of China – the fourth-largest bank in the world
– as a lobby manager. In this role, it receives customers arriving at the branch, takes their information, and efficiently directs them to the correct department.

At a public summit for the international digital marketing company, Bazaarvoice, Sanbots took an active part onstage. Verbally announcing speakers and projecting CVs behind them, they also were on hand to interact with the audience.

As part of Pizza Hut’s Malaysian digital concept store, Sanbots drew in customers by performing outside. And, once within, they used their facial recognition software to personally respond to Pizza Hut reward members.

Other businesses who’ve deployed Sanbots include 3W Coffee, the Internet Café chain, Saier Technology (a catering company), and Oppein, a home appliance shop. Besides a service role, the robots help share the businesses on social media and assist with customised tasks such as helping customers choose between retail options like colour and price.

Sanbots were at the launch of Shenzen Rail Transit metro station – to welcome commuters, as well as supply information about their new service.

A customised Sanbot is in residence as Beijing Court House and is capable of dispensing 20,000 legal Q&As. Guiding citizens toward life-changing support and advice, it’s an excellent example of what the technology is capable of with advanced customisation.

Krakow Airport introduced a Sanbot in 2017, finding that interacting with such a cute humanoid robot was effective in distracting and thus calming down nervous flyers. 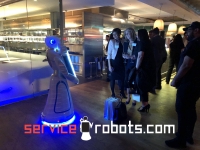