Are Robot themed Restaurants a reality not so far in the future, many insiders certainly think so and with a few elite Restaurants already employing the use of Robot Waitresses to serve Customers, it is predicted that many more establishments will follow.

Customers can be both greeted by Robots when they arrive, order their food and then be served by Robots.  Many establishments that have already tested the Robots in their premises have favorable feedback from both staff and customers.

This comes at a time when establishments are very much having to think outside of the box and not only adhere to new rules regarding social distancing but be able to do that and create a fun and entertaining environment. It is true also that we are going to be living with a new norm for quite some time and being able to provide confidence for both customers and staff is vital going forward.

Restaurants are more willing than ever to think outside of the box as they prepare to reopen and service Robots are certainly leading the way, not only are they providing an excellent service, entertaining guests and offering real entertainment, they are also helping to ease the burden of social distancing between staff, providing much needed confidence to both staff and customers.

A Restaurant in China called country garden in the city of shunde has opened as a Robot only staffed environment.  The companies Restaurant employs 20 Robots which are designed to serve several dishes including Chinese cuisine, hot pot and fast food.

Whilst we may have to wait a little longer in the UK for the first Robot only Restaurant, it is predicted that we will begin to see changes occur in the not too distance future where service Robots delivering food and taking orders will be the new norm in many restaurants up and down the country. 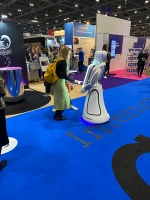